The extraordinarily simple idea behind digital audio was its robustness. Once in the digital domain, your original analogue signal cannot be corrupted, other than by gross negligence, and so can be reconstituted perfectly into the original analogue waveform. Ergo perfect music reproduction (that is what they said!).

Well, we have known that CDs were not always equal. CDs burnt on a laptop didn’t sound as good as pressed CDs. CDs stamped on Sony presses tended to sound better than those on Polygram presses. The apparent ‘fact’ that the digital data was equal but different storage methods affected the sound quality wasn’t acknowledged in the industry. This changed when Sony produced Blu-spec CDs. These CDs were pressed to Blu-ray standards, with much better definition of the ‘pits’ read by the laser mechanism of your CD player. On a good CD player, these discs sound extraordinary!

While forums erupt in crescendos of bile and vitriol if the very subject of bit storage and transfer affecting sound quality is proposed, the people who understand the process have been quietly getting on with improving digital music reproduction, both in terms of the software and the hardware available.

If you want to try Blu-spec CDs for yourself, click here.

Update 25th July 2019: A major step forward in wired streaming through a combination of technologies. Primarily isolation. Electrical and mechanical. By using a seperate network ‘switch’ for your audiophile components (the price of a basic router) and optically isolating this from the incoming network, you get a major step up in performance. With mechanical isolation of the system using the new MusicWorks AcouPlex disks, this becomes a MAJOR increase in transparency. For anyone who wishes to try this, please contact us for details and a demonstration. 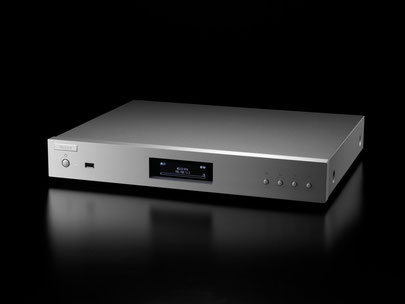 Streaming data integrity (ie the bit definition during storage and transfer) has lagged CD by some margin, although, again this information is not widely known amongst audio experts. However, some people who know what they are doing have been quietly working behind the scenes to transform data storage and transmission in networked systems. The company that, as far as we know, has taken this particular bull by the horns, wrestled it to the ground, and tied its legs together with pink chiffon, is Melco.

In identifying the weakness in digital domain data handling, and addressing the inherent weaknesses of the ‘computing’ approach, they have produced a series of networked storage devices that provide a new level of audio performance. These devices can be used as network players, through their own USB connection, as locally connected network storage by direct connection to a streamer through ethernet, or as a superior NAS drive.

In tests, the performance of the lowest cost Melco unit (the N1A), clearly outperformed all other of our storage devices even when using something as modest as a Naim Uniti Qute. Higher performing systems benefit even further.

Accuphase is our current digital reference. They do not think streaming is good enough for them to put their name to a streamer, just yet, but have this to say on streamed data which they can process using a USB input on all their players and DACs:

But this turned out to be much harder to do than I expected. For internal data, we can use our own transports that generate a very accurate data stream. But when you use external data sources, that are usually much less precise, you run into a mountain of trouble. For some time it even looked like we would be unable to clean up the external data enough to get real Accuphase quality at the end of the process. That would have been a legitimate reason not to provide this service, but fortunately we pulled it off just in time. So there you have it: a small glance into the possible future of Accuphase Streaming Audio. Because everyone who has heard digital music files through our new DP-550 sacs-player has been stunned by the quality that turns out to be hidden in these files after all.